Stockholm metro has a story that stretches back until 1933. 80 years later came the first metro map for Stockholm, completely designed with HTML and CSS. This means that the graphics are vector based, which allows you to zoom in and out on the map without blurring as an image becomes. There is also an interactive MRT map of Singapore available if you are traveling to Singapore. 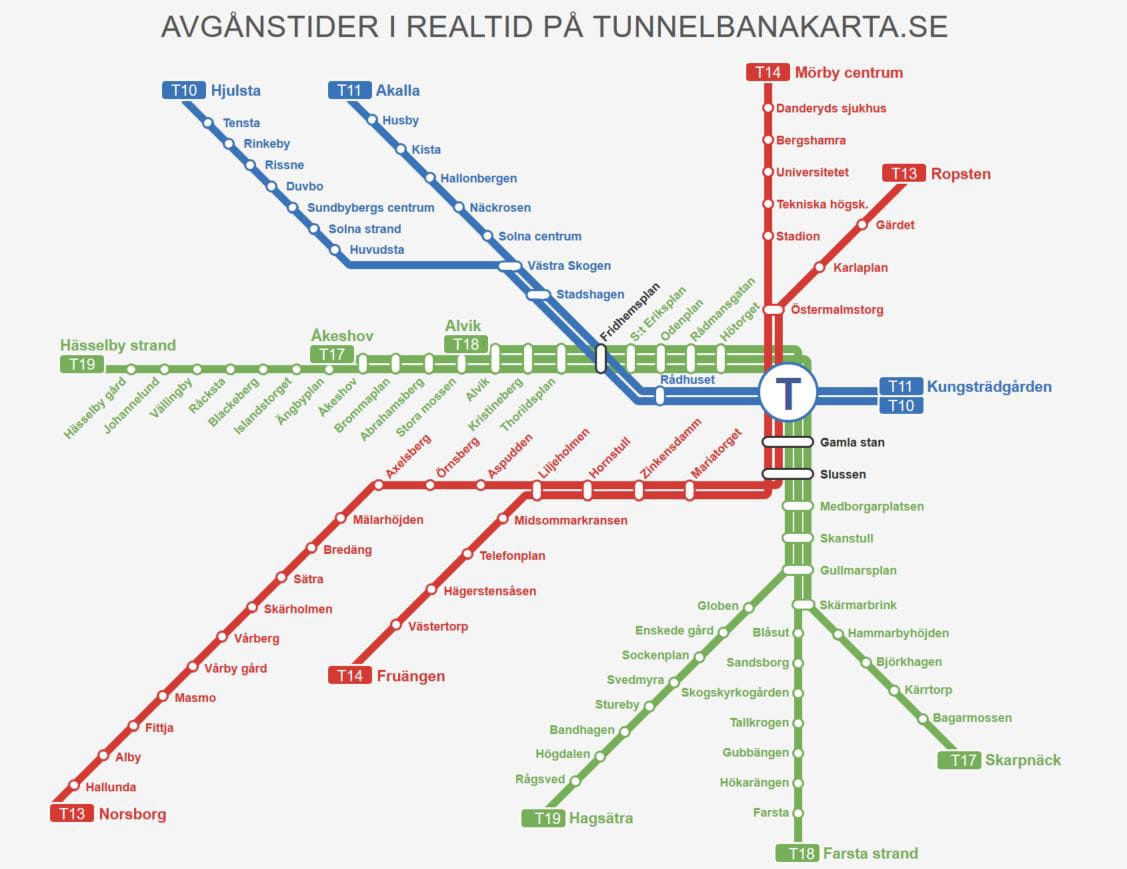 2016 was the starting point for the expansion of the Stockholm metro. This project is expected to be fully expanded by 2025. It is mostly an extension of blue line that will extend from Barkarby station all the way to the Nacka Forum.

More about the metro in Stockholm

Stockholm metro is a metro in Stockholm City, Sweden. The first track was opened in 1950, and today the subway system has about 100 stations and more will be added within a couple of years. 47 of these are underground and 53 are above ground. There are three colored lines on the line map. However, these need to form seven actual lines (with different start and end stations). Lines number 17, 18 and 19 (belonging to the green ), 13 and 14 (red ) and 10 and 11 (blue main line) all these lines pass T-Centralen which makes it a very central metro system. In addition to the T-station there is only one other station where the lines are crossed, and it is Fridhemsplan’s metro station.

The metro is like London’s metro and Paris subway but unlike the U-Bahn and S-Bahn in Berlin equipped with ticket gates. No ticket check is done on board the train as it is done on a reular train with conductors, but it is quite common for inspectors to show up on the train. Individual tickets must be purchased in advance (usually in privately owned smaller stores and kiosks) or at ticket machines available at all metro stations and at several metro or bus stations. Passengers can also buy tickets in the stall at the gates of the subway.

The 105.7-kilometer subway is owned by Stockholm County Council through the company Storstockholms Lokaltrafik (SL). The operations are contracted to MTR Corporation.

Stockholm’s metro has been called the world’s longest art gallery, with more than 90 of the network’s 100 stations decorated with sculptures, mosaics, paintings, installations, engravings and relics of over 150 different artists.

The decision to build a subway was made in 1941. Some subway lines were built as subways but were run by trams. Among other things, Kristineberg, Slussen-Blåsut (including the oldest tunnel Slussen-Skanstull from 1933) and Telefonplan-Hägerstensåsen. The first part of the subway was opened on October 1, 1950, which departed Slussen to Hökarängen, at that time, you went completely from tram traffic to metro. In 1951 a second line was opened from Slussen to Stureby. In 1952, one also started driving from Hötorget to the western suburbs. In 1957, the two parts were connected via the Central Station (at the T-Central) and the Old Town (at Old Town’s metro station), and then formed the green line. During the period 1950-1960 the green line was extended bit by bit.

The red line was opened in 1964, which went from T-Centralen via Liljeholmen to Fruängen and Örnsberg. Even that line was extended bit by piece until 1978. The third and final line of the line system, the blue line, was opened in 1975, with two lines that went north-west from the center. As construction requirements have become more stringent in recent years, hence the stations were built on the blue line with much closer distances. The latest addition to the entire network is Skarpnäck station, which was opened in 1994.

About the metro stations

DThere are 100 stations in use in the Stockholm metro (of which 47% are underground). A station, Kymlinge, was built but never taken into use. A station has been disconnected and demolished. The Bagarmossen old surface station was demolished and replaced with a new subway station, instead, this before Metron to Skarpnäck metro station.

Stockholm metro is well known for its embellishment of the stations; It has been called the longest art gallery in the world. Several of the stations (especially on the blue line) are left with the bedrock exposed, raw and unfinished, or as part of decorations. At Rissne, an informative wall about the history of the earth’s civilizations runs along both sides of the platform.

The following information relates to the current network. The terms ”blue line”, etc., have been used only since the late 1970s, and officially only since the 1990s. They derive from the fact that the ”blue line” tended to drive newer trains making painted blue, while the ”green line” had older layers in the original green life tree. There was never any red-painted layer, but, but red (or originally orange) was chosen to distinguish this line from the other two network on-road maps.

The blue line (Tunnelbana 3) has 2 line numbers and 20 stations: 19 underground (all rock) and an elevated station. The course is 25,516 meters long. It opened August 31, 1975. It is used by 171,000 passengers per working day or 55 million per year (2005). Trains run from 5:00 to 01:00, with extended all night service on Fridays and Saturdays. All lines have trains every 10 minutes during daytime, reduced to 15 minutes in early mornings and late evenings, and every 30 minutes during nights. Additional trains during rush hour provide a train every 5-6 minutes at most stations, with 2-3 minutes between trains on the central parts of the network.

The metro contains four traffic (T-Central, Slussen, Gamla Stan and Fridhemsplan) and lacks any circular or partial circular line (although Stockholm has a semi-circular tram line, Tvär). An overwhelming majority of subway stations are located in suburbs, but the network is centered at the T-Central where all trains throughout the network pass.

In the past, there have been additional line numbers used for trains run on part of a line or only during rush hours. For example, row number 23 was used for a top relief train for line 13 which was run between Sätra and Östermalmstorg in the 1970s between Norsborg and Mörby Centrum.

Another option is automatic train operation, which helps the driver by driving the train automatically. However, the driver still drives the door controls and allows the train to start. As of 2006, ATO is only available on the green line, where a new signal was installed in late 1990. This signal system, along with C20 rolling layers, allows the use of ATO. However, the red line signal system is to be replaced by communications-based train control made by Ansaldo STS, which will come into operation in 2014.

In 2013, it was announced that an agreement had been reached on the future of several extensions, with construction expected to start in 2016 and commercial traffic on the first sections scheduled to start in 2020.

Extension of the blue line south from Kungsträdgården. There will be a new station in Sofia on Södermalm, after which the line divides with a branch continuing to Nacka (with three new stations) and the other to new underground platforms at Gullmarsplan, after which it will take over the current green line branch to Hagsätra. This allows higher frequencies on the green line to branch to Farsta Strand and Skarpnäck, which is currently limited by the fact that three branches pass the bottleneck at the T-Central.

Extension of the blue line northwest from Akalla to Barkarby railway station via a new station. The construction of a new fourth subway line, initially consisting of a short three-station line north from Odenplan via the new development on Hagastaden and ending in Arenastaden. This is planned for a possible extension to Danderyd and Täby in the northeast, exchange with the existing red line to Mörby center.